Engineering AnalyticsHow to use cycle time to improve your dev velocity? 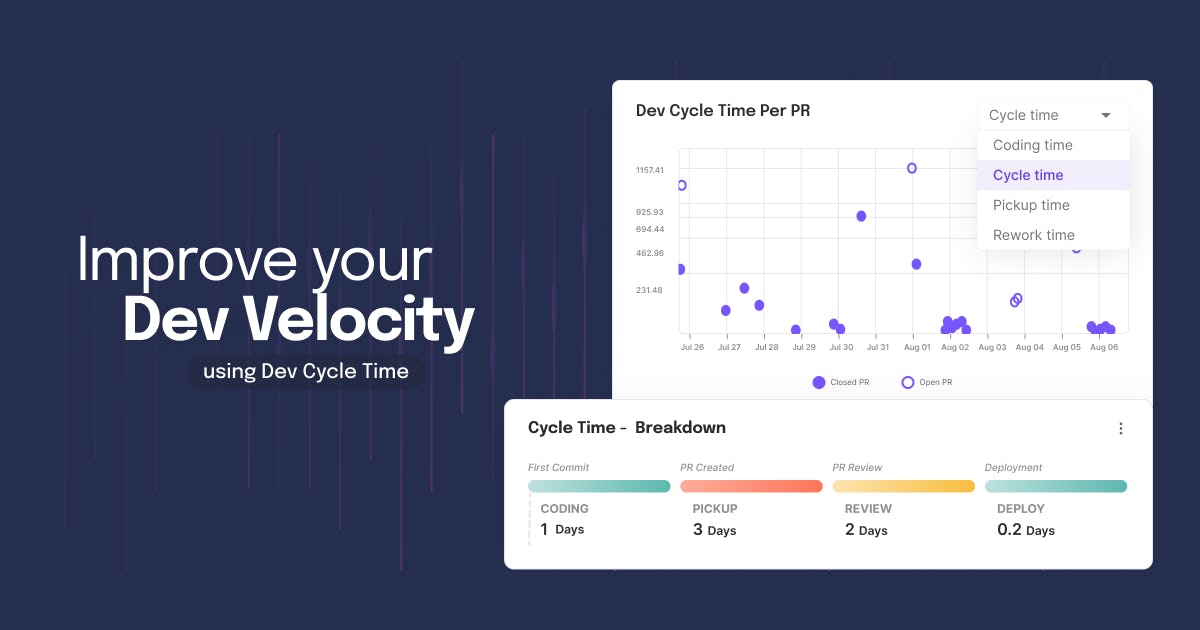 Software development cycle time refers to the time taken from first commit of a PR to its deployment. It indicates the amount of time between the start of a task/work until when it is delivered. The cycle time metric can be broken down into four components: 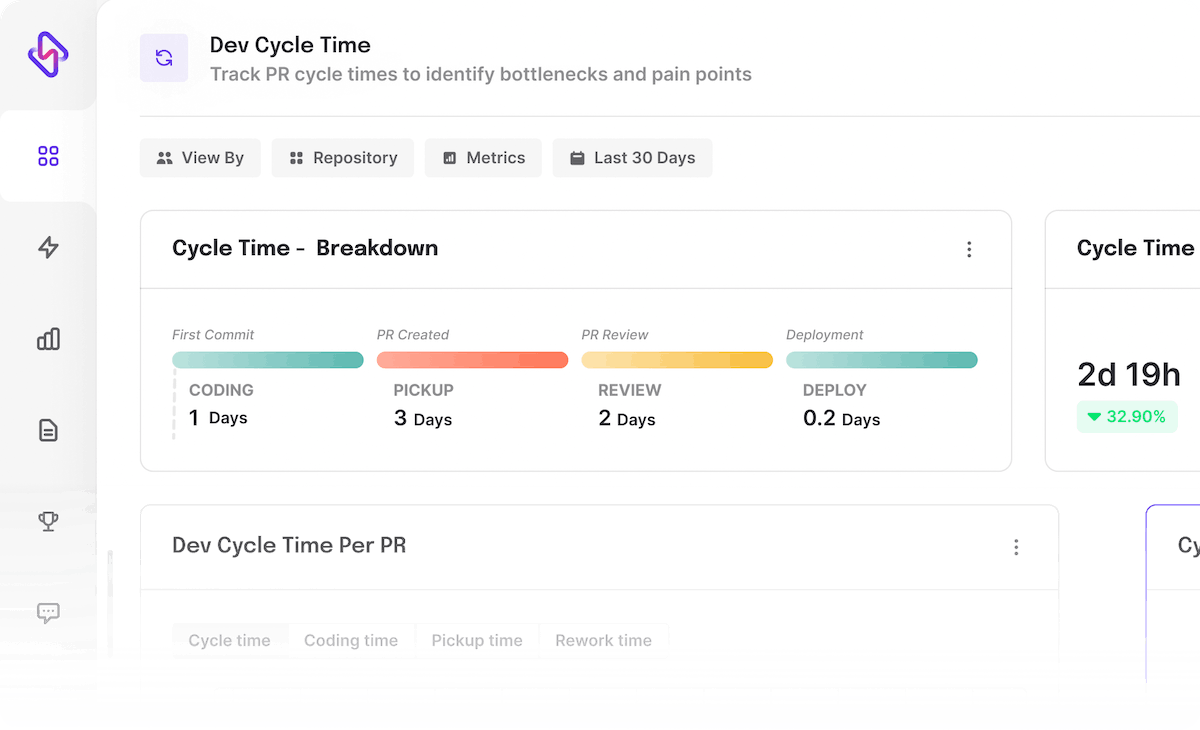 Essentially, the cycle time metric is a team and project metric that can be used to gauge the delivery velocity of a team. As it measures the time taken to complete a particular dev task it can serve as an indicator of a team’s process speed and efficiency.

How does the cycle time metric help dev managers?

The primary purpose of the cycle time metric is to help dev teams identify blockers in the team workflow in order to help them speed up their delivery. As a lagging indicator, i.e., a metric that confirms patterns that are in progress, the cycle time metric can be used as a signal of underlying issues in an engineering team’s workflow. Thus, along with related metrics, it can be used to do a root cause analysis as to why the team faces process issues. (Read on for more details)

How to use the cycle time metric?

Cycle time, the lagging indicator, can be an invaluable tool for managers to identify where their team’s bottlenecks lie and more importantly, identify what issues are causing the high values. Let’s breakdown cycle time into its four components and look at some common causes, effects, and solutions to preserve optimum values in each component:

Coding Time is defined as the time taken from the first commit made to a branch to when a PR is created. Using Hatica’s cycle time dashboard that integrates version control tools (Gitlab, Github, etc.) and project management tools (Jira, Notion, etc.), teams can measure coding time. The ability to measure coding time allows us to identify why the value might be high and how to combat it.

Overwork and burnout: When too many tasks are assigned to a developer, it can put multiple WIP tasks in their sprint. Multiple PRs in progress for developers in a team leads to increased cycle time. 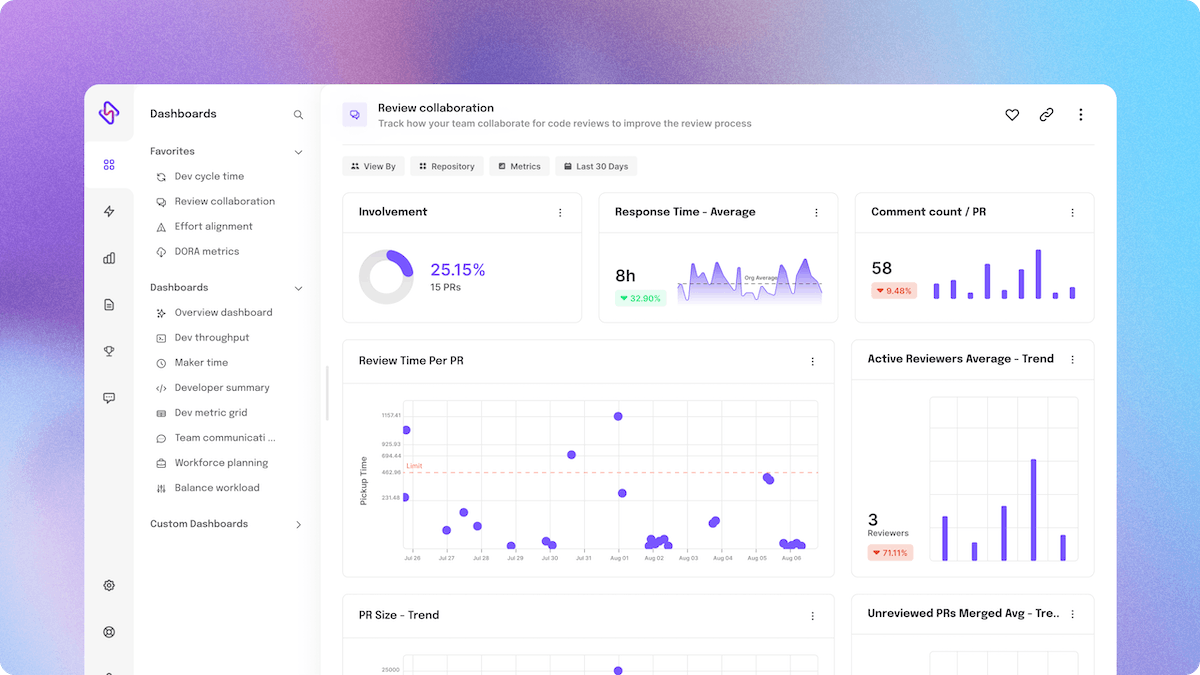 💡Addressing the issue of large PR sizes using quantitative metrics about batch sizes can help reduce PR size and task sizes. Team discussions and feedback during retros can be used to develop better workflows to break down PR sizes that enable teams to merge code at a consistent pace.

💡Managers can use metrics such as average active PRs per author to avoid overwork and to better allocate tasks.

💡Understanding the PRD to understand the the complexity and scope of new work along with potential risks can help managers spec clear tasks and allocate the right resources to each task.

Pickup time is the time between when a PR is created and when the PR receives its first review.

Lengthy PR Pickup times indicate potential bottlenecks in the development process and are often a result of:

💡Measure PR Pickup Time trends along with metrics like PR size, comment activity on reviews, etc., to understand review metrics and review quality. Managers can use insights from PR metrics and trends to create goals that can improve the code review process and thus optimize cycle time. 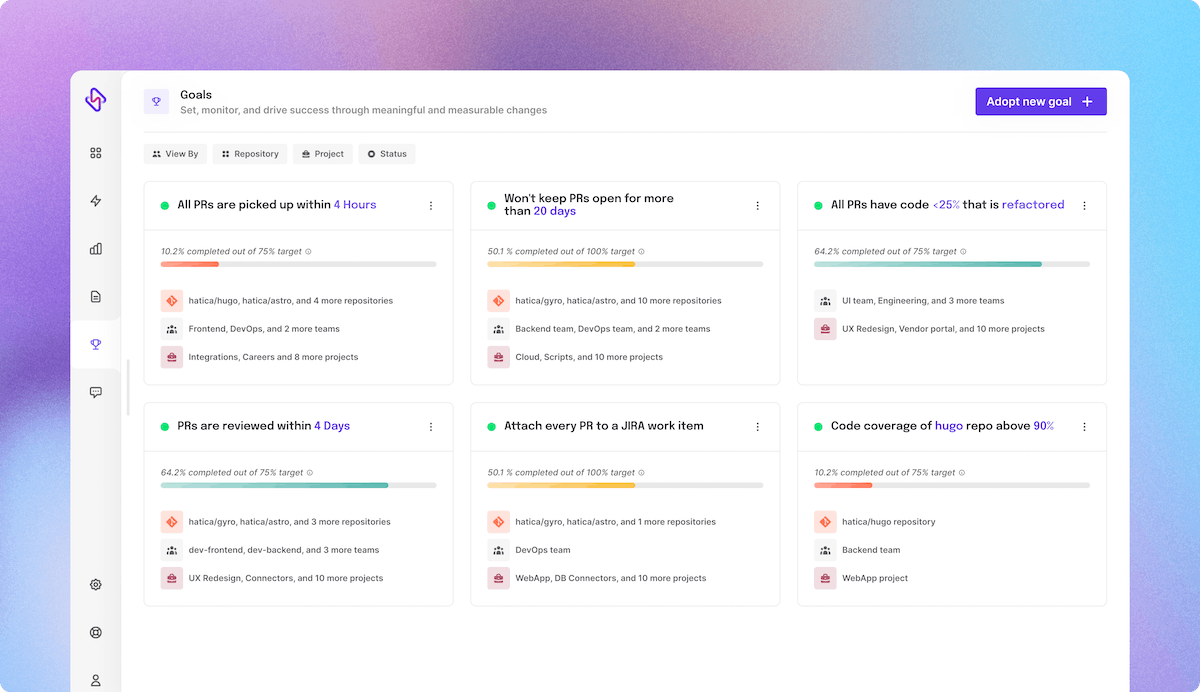 💡Invest in infrastructure to facilitate faster and stable builds. Modern testing tools such as the test-at-scale product by Lambdatest are equipped with the intelligence to run only the impacted tests and not the whole test suite, thereby greatly reducing a developer’s waiting time.

Rework time is the time taken for a developer to delete or rewrite their code shortly after it has been composed, after a PR review. When it comes to rework time, high is not necessarily bad because when PRs receive high quality code reviews, they inevitably lead to higher rework. However, when rework time is too high for your team’s benchmarks, it can be an indicator of issues. So what should managers do?

Deploy time is the time between when a PR is approved and when it is deployed. Obviously, teams generally prefer low deployment time. This metric corresponds to DORA metrics that can be used to identify opportunities for process improvement. This metric is critical since productivity is all about deployed code - if a code is not deployed then effectively, the output is nil for that effort.

It’s important to note that time to deploy cannot be measured using fixed thresholds since the value would differ based on the kind of service/project under question. For instance, mobile apps will have releases further apart than a micro service which might have more frequent releases. Hence it’s important to identify the right benchmarks for each deployment.

Generally, time to deploy is higher than benchmark if there is a long wait time or flaky builds in CI/CD that delay merges. At other times, when a PR needs multiple or slow tests before deployment, it can lead to increased time to deploy.

Although thresholds depend on workflows and the nature of the projects, whether mobile or a micro service, and/or the repo, the overall cycle time including optimum target times for coding to merge time are generally similar across project types.

For most high-performing teams, Cycle time is less than 4 days. For these teams the breakdown average ranges are:

Time to deploy remains specific and highly dependent on the kind of project or repository. Here, the average ranges for mobile are less frequent (from 1 to 4 weeks for consumer apps on average) while for active microservices they tend to be daily.

A trusted source for benchmarking time to deploy is the deployment frequency thresholds in DORA metrics as suggested by the Accelerate DORA actors themselves. More on this, here. 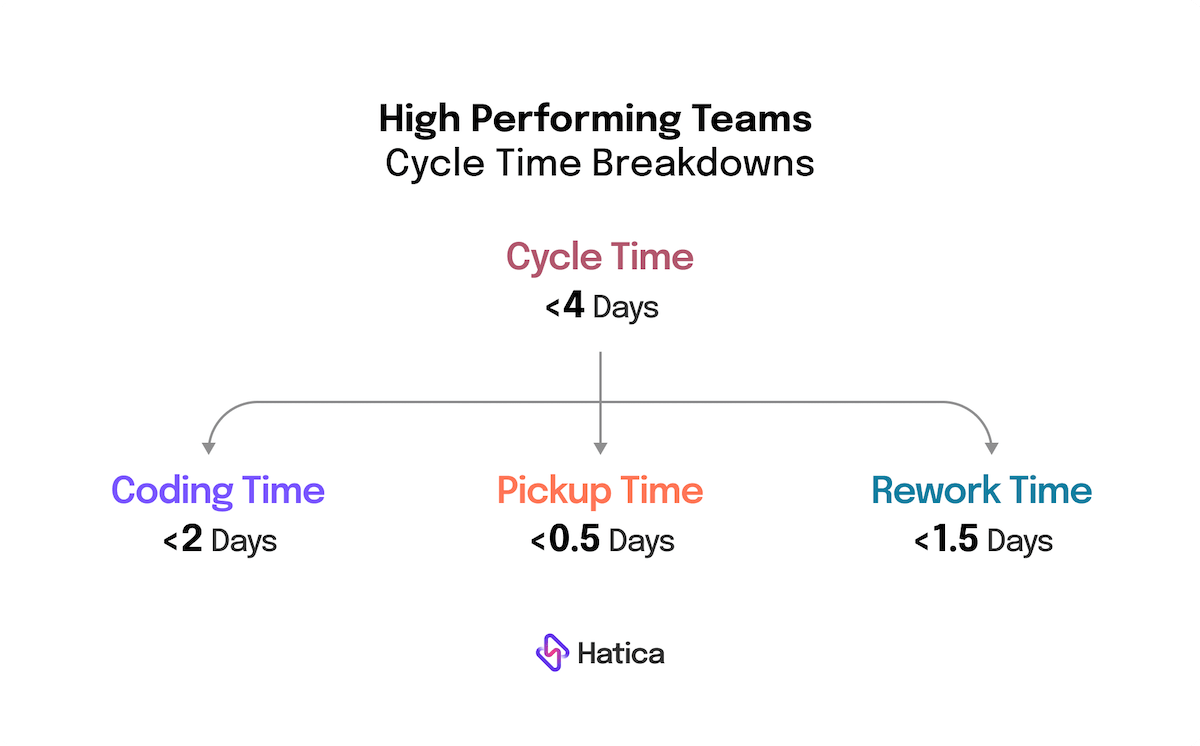 What it is not

It is essential for engineering managers and leaders to stay conscious of the fact that cycle time is not an individual metric. Rather, it is a team and project level metric that highlights a team’s delivery cadence and helps maintain stable efficiency metrics. Thus, cycle time is not an indicator of quantum of output but the speed of output, and hence when managers optimize their team’s cycle time they are able to optimize their team’s ability to deliver, thereby improving their dev velocity.

Here are some heuristics to watch out for:

💡Hatica equips engineering teams with granular visibility into team cycle time alongside 60-plus other metrics enabling them to reduce bottlenecks to accelerated delivery and achieve a better developer experience. Learn how Hatica can help you build better engineering teams. Request a demo →